When Margrethe Mather (1885 or 1886-1952) met Billy Justema in 1922, she was 36 and he was 17. Through spending time with him, Mather found a way out of her grief over the unexpected suicide of her close friend Florence Deshon. Through their relationship, Justema searched for a state of mind that would allow him to define both his artistic path and his sexuality. Mather photographed him as an enigma, as he was at the time to himself, in the process creating a portfolio to rival that of Alfred Stieglitz’s images of Georgia O’Keeffe. I could point out the sure compositional structure that informs Billy Justema in a Kimono (above), the curves and angles that form a harmonious whole, all things typical of Mather’s work. [quoted from The Blue Lantern on blogspot] 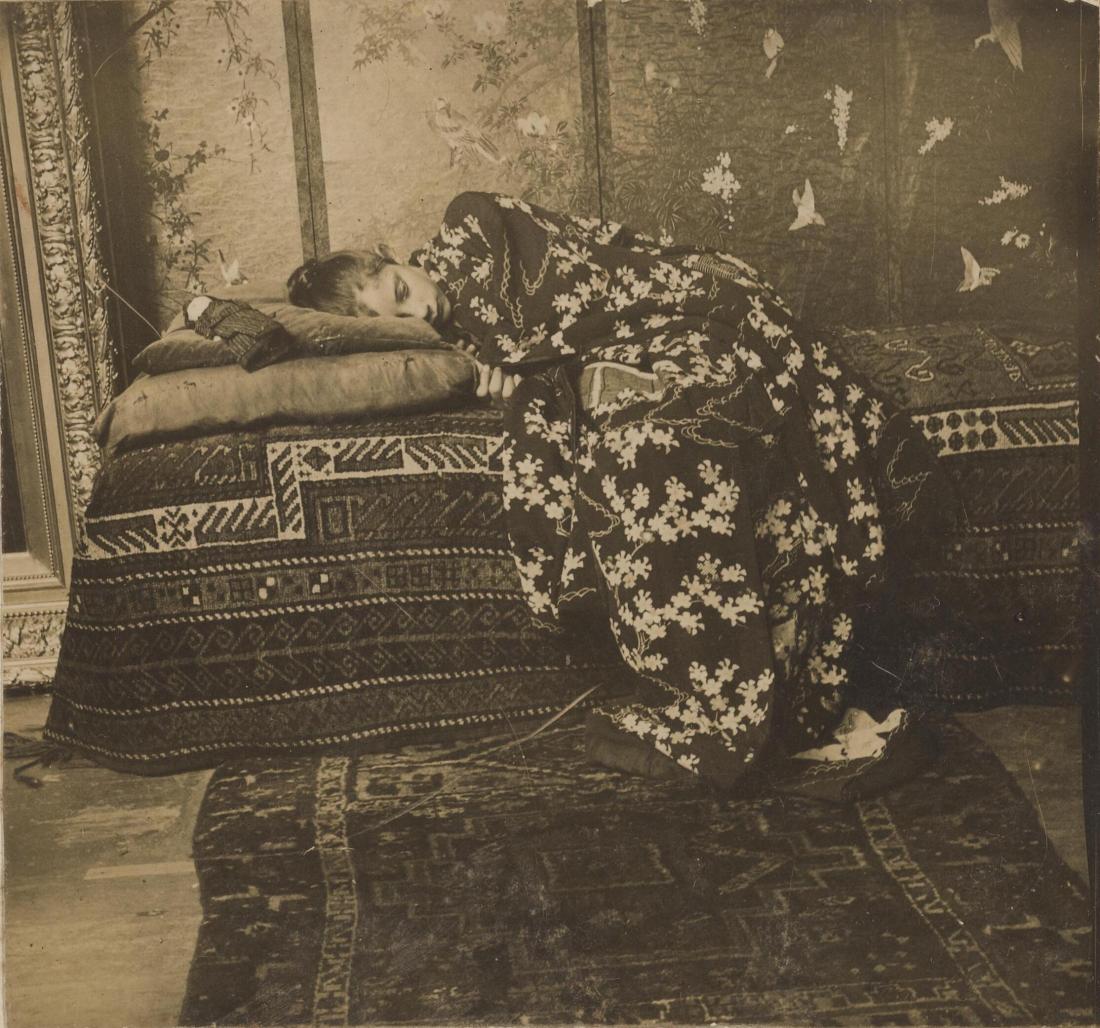 Inspired by Japanese prints, between 1893 and 1896 Breitner made thirteen paintings of a girl in a kimono. She assumes different poses and the kimono often has a different colour. What catches the eye here is the embroidered, white silk kimono with red-trimmed sleeves and an orange sash. The dreamy girl is sixteen-year-old Geesje Kwak, a seamstress and one of Breitner’s regular models. [quoted from Rijksmuseum]

The Girl in a Kimono series was not a success with critics initially, but today they are considered the pinnacle of the Dutch expression of Japonisme in the fine arts. The Rijksmuseum celebrated the series in 2016 with an exhibition that brought together all of the Girl in a Kimono paintings: “Breitner: meisje in kimono”.

After the reopening of Japan to foreign trade in the 1850s and 1860s, European artists like Claude Monet, James McNeill Whistler and Vincent van Gogh were influenced by Japanese fine and decorative arts. One of Van Gogh’s friends and compatriots, George Hendrik Breitner, was inspired by the Japonisme trend to create a series of 13 paintings of a young girl wearing a kimono.

Breitner was born in Rotterdam in 1857. For the decade between 1876 and 1886 he studied and worked in The Hague where he explored working class areas of the city, sketching the people and places he encountered. He embraced the social realism movement and considered himself le peintre du peuple, the painter of the people. He moved to Amsterdam in 1886 where he was soon able to add photography to drawing and painting. Breitner took pictures of street life, people at work and going about their business in the city, some of the photographs reminiscent of the kind of work Jacob Riis was doing in the crowded and scary tenements of New York City at the same time.

Breitner was one of the first artists to use photos as studies for specific paintings, not just of street scenes but in the studio as well. He integrated his social realist perspective in his studio portraits, making a point of employing models from the working class. One of them was a milliner’s shopgirl named Geesje Kwak who, along with her sister Anna, posed for Breitner in around 1893-1895 when she was 16-18 years old. It was Geesje Kwak who would be immortalized as the girl in a kimono.

Japonisme had intrigued Breitner since he’d traveled to Paris in 1884. He collected Japanese woodcuts and in 1892 visited an exhibition of Japanese prints in The Hague. The show was his immediate inspiration for the kimono series. He acquired several Japanese kimonos and a pair of folding screens that he set up in his studio on the Lauriergracht canal. Geesje Kwak posed in the kimonos — one red, one white, one blue — against the backdrop of the folding screens on a bed draped in oriental rugs. She was paid for her time and there was no hanky panky going on; all strictly professional. Breitner kept meticulous records of which models posed for him when, for how long and at what rate.

Breitner’s work with Geesje Kwak ended when she emigrated to South Africa with her younger sister Niesje in 1895. Geesje died of tuberculosis in Pretoria in 1899, just shy of her 22nd birthday. quoted from The History Blog